This is a video link to the famous ISKCON Chowpatty Flower festival, held on Saturday January 29. In attendance were Caru Das, who filmed the event, Radhanath Maharaj, Vyasaki, Satyaraj, Chandra Mouli Swami, Prithu Das, 300 brahmacharis, and about 8,000 members of the public. 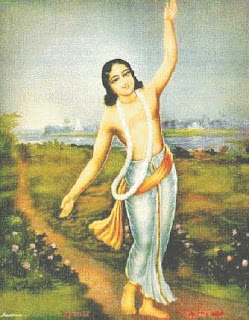 This is the link to a video taken of the recent Nityananda festival in Pune: huge crowd, abhishekam, drama, and talk by Caru Das.

http://youtu.be/0SXRDeXMtHI?a
Posted by Utah Krishnas at 6:27 PM No comments:

Nisargopachara Ashram was founded after Gandhi came to the small Maharastran village of Uruli Kanchan in 1946 for some natural healing. He thereafter collaborated with Manibhai Desai to establish a permanent center in this rural village for health and well being through natural foods, natural treatments, and yoga.

Today the 25 acre campus provides Spartan accommodation for about 125 guests at a time, grows quite a bit of its own food, gets milk from its cows (located elsewhere), and runs separate treatment centers for men and women. These centers offer as part of the registration fee (which varies from 80 rupees daily for dorm to 350 for shared rooms – minimum stay one week) local and general steam treatments, mud applications, yoga classes, neem oil soaks, enemas, and doctor consultations.

Half hour oil massages cost 30 rupees per, acupuncture is 300 rupees for ten days of sessions.

Patients purchase coupons, which are tendered for two inexpensive meals (approx. 40 rupees each) daily and fruit juices twice a day. Some of the juices available are carrot, white squash, beet, orange, amala, tulsi, neem, karela, and last but not least, WHEAT GRASS. The meals are prepared without white flour, oil, salt, or sugar. Typically there will be a boiled vegetable, rice, buttermilk, chapattis, and shredded carrot salad with coconut chutney.

Caru Das is half way through a two-week stay. He is the only Westerner on site. All the signs and most of the speech are in Hindi, so it’s a great opportunity for him to put his limited Hindi to use.

Ramesh Patel of Salt Lake City had informed him of the ashram and kindly offered to sponsor the visit if it would help Caru put the melanoma cancer of 2008 further behind him and give a few more years of life with the Utah Krishna Temple.

When Caru received this offer from Ramesh, he thought Nishargopachar Ashram also would be an ideal peaceful place to prepare Sunday lecture talks and power points for 2010. That has proven true, as in the first five days he’s done the research from Vedabase and other sources for four new talks: Setting Godly Goals, Express Yourself, A Matter of Time, & Ever a Hero. Internet access is limited and slow, so he’s going to wait to add the images, but all thought sequences and text is done.

These talks and power points will eventually be available for download on the web site, http://www.utahkrishnas.org/. Incidentally, we’ve had over 1,000 downloads of 2009 talks from Itunes, since Jerry, God sent Internet whiz, started placing them there in October.

Another bonus for Caru has been the 5/8 mile walking/running track around the ashram compound. Each morning he has managed 45 minutes of jogging while listening to inspirational lectures on his ipod. He had no running shoes but discovered that crocs are not bad for casual running.

His roommate, a 58 year old Bombay Brahmin named Dattatreya, and he have formed a fast friendship, trade Sanskrit slokas back and forth, and share a papaya every evening before bed. Caru buys (20 rupees) and Dattatreya peels and slices.

While probably most people come to the ashram to lose weight, Caru is eating a lot more solid food here than at home, where his principal sustenance is from juices: squeezed carrots, celery, beets, apples and pineapple. This is his first in 20 or more visits to India where he’s not had to worry about getting sick on the food!
Posted by Utah Krishnas at 5:57 AM 1 comment:

This is the link to an article which appeared yesterday, Jan. 14, in the Provo Daily Herald.
"We already receive around 50,000 visitors a year for festivals, tours, school field trips, yoga classes, and our Sunday services, but we wanted to do more for people who can not make it to the temple."
http://heraldextra.com/news/local/south/spanish-fork/article_18773d17-59aa-57bb-bd7f-1acd94e1e310.html
Posted by Utah Krishnas at 12:25 AM No comments:

Caru das left for India early Sunday morning January 3rd via Delta from SLC to Atlanta to Amsterdam and Mumbai. Due to the expert booking of the tickets by Kiran Kamdar there were no long layovers. He basically got out of one plane and walked to another gate where boarding was in progress. It was the easiest India trip he’s ever made.

There he was accommodated in one of the excellent guest rooms by Nakula das, guest master. Radhanatha Swami was in Delhi with a number of devotees for the launching of paperback version of his book, The Journey Home. Gouranga was with him, but instructed the devotees in Chowapatty to take every opportunity to hear from Caru. Thus he gave an afternoon class the day he arrived, and three classes in each of the next two days. Only two of them provided him an opportunity to use power points but they were the best received, further revealing the potency of this type media. Gouranga also instructed Nakula to take all power points from Caru’s computer with a flash drive. Caru’s room was equipped with wireless Internet, so he was able to work on new presentations when not lecturing. It was a very nice three-day stay, and he plans to return there after the present engagement. Nakula arranged a train ticket to Pune early Friday morning and took him to the train.

From the window he had his first good look at the inland of Maharastra, the rugged land from which legendary Shivaji waged a guerilla war of independence against the Moghul Auranzeb.

Pune devotees Rukmini Priya, Dina Saran, and Mahamantra Das showed Caru hospitality equal to Chowpatty, providing him the VIP guestroom, a brunch, a chauffeured trip to the new temple construction site (he took video of the building but had a problem getting it downloaded to the desktop) and lunch, before personally arranging a car and driver to take him the 35 kilometers east to Nisharagopachar ashram in the rural town of Uruli Kanchana.Gandhi and Manibhai Desai founded Nishargopachar Ashram as a Natural Cure Oasis in 1946. The 25 acres campus holds a capacity of about 150 guests, and considerable staff. More about this idyllic place in the next posting…
Posted by Utah Krishnas at 5:27 AM No comments:

Japathon 2010 January 1, 2009
New Year's Day Japathon was a much anticipated opportunity for the community to gather together under the banner of the Holy Name. We had wanted to start the New Year by chanting one name of Krishna or Rama for every resident of Utah Valley, around 300,000. We far surpassed that target by accumulating 582 rounds during the course of the day. That number of rounds comes to 502,848 Holy Names. Most chanted at home before coming to the temple for an arati at noon, lead by Jai Krishna. A sumptuous feast was served downstairs, which included samosas, lasagna, rotis, and many items thoughfully delivered by Avtar and rakesh Singh of Star of India restaurant. They added to the deast channa, rice, kheer, badam, and sabji. Fortified by the prasdam, everybody together throughout the afternoon in the temple room. Visitors were loaned japa beads and asked to chant at least one round. All together there were 43 participants. It was a great event, lot of fun, and a good spiritual "jump start" for the New Year.