Ask any Spanish Fork resident and they will be able to point you in the direction of one of the most unique buildings in town and possibly in the whole state. Perched on a hill just south of downtown Spanish Fork stands the Sri Sri Radha Krishna Temple. Completed in 2001, the Krishna Indian Temple certainly stands out among the surrounding rural fields. Read More...
Posted by Utah Krishnas at 5:19 PM No comments: 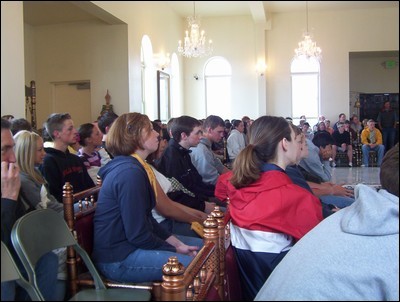 Friday from 10 am til noon we hosted 80 students from American Leadership Academy, some teachers and parents. A.L.A. is a charter school K-12th grades only a mile from the temple. The students on this tour seemed about 15-16 years. They crowded into the dining area seats for a 45 minute power point by Caru called, "India, the Cradle of Civilization." They were attentive, well behaved, and readily laughed at Caru's witticisms. Upstairs in the temple room, Hanuman lead them in yoga for half an hour (which occasioned even more good humor), followed by kirtana, and finally, outside for some llama handling, cow petting and peacock gazing. The temple hosts many such school tours from as far away as Cedar City ad Bountiful. A.L.A. happens to be the closest.
Posted by Utah Krishnas at 3:06 PM No comments: 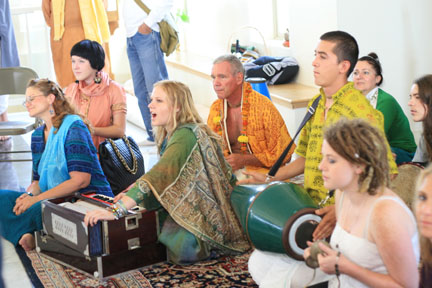 Last Thursday evening devotees chanted for the Utah Valley University annual Hunger Banquet in the Grand Ballroom. Caru Das gave a two minute introduction indicating that Hunger worldwide is caused less by a lack of resources than by a lack of God Consciousness. The following then tried to do their bit for increasing God Consciousness by chanting the Maha Mantra for 15 minutes while slides of Krishna Deities were projected onto a large screen: Hanuman, Sadie, Wendy, Keshava, Yasoda, Rakiv, Caru, Celia, and Steven. The students and faculty appreciated with hand clapping during the music and applause afterwards.
The organizer. Dallin, had seen the devotees chanting at the BYU Hunger Banquet in March of last year, and thought to invite them to Utah Valley University. He mentioned he had also attended one of the Sunday feasts wherein Caru had talked about the “Manure happens” aspects of our lives serving as good fertilizer for spiritual growth and strength of character. He said he hasn’t forgotten that mkessage and shares it with his friends whenever he gets the chance.
James Rohr, an intern photographer for the Provo Daily Herald, has been shadowing the devotees for a few days in preparation for a photo essay on the temple which is scheduled to appear this coming Monday.
Posted by Utah Krishnas at 9:01 AM No comments: 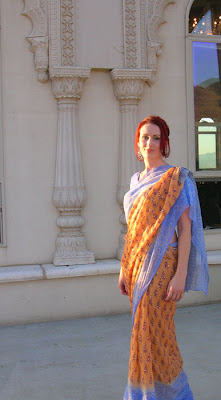 The festival is set around the main event, the pageant of the epic Ramayana and the burning of a 20’ high ten-headed demon named Ravana. Multi-course meals were served of Indian curry with home made cheese (paneer), blueberry hallava (which I thought was quite tasty!), spicy Bengali rice, and giant lentil chips (papadams). Read more...
Posted by Utah Krishnas at 11:27 AM 1 comment:

This is another blog about the Festival of India, by Alyssa Ball.
The opportunity came last week when I was reading the Daily Universe. There it was! The ad for India Fest. I basically counted down the days until Saturday the 12, and then I dragged a few friends with me to experience India for a little. It was so great! Read more...
Posted by Utah Krishnas at 7:27 PM No comments:

India is on our list of places to see before we die. We love everything Indian from the food to the art to the history to the music. And yes, even Bollywood. Since we're still climbing out of the financial pit from our month in Austria, we won't be heading over to the Asian continent anytime soon. So instead, we decided to take a little Indian staycation by going to the Festival of India at the Hare Krishna temple in Spanish Fork.

"Hold on a minute," you might be thinking. "A Hare Krishna temple in Utah?" Yep, they've got one, and it's been there for quite a while. It's quite impressive for a small Utah town. And the Hare Krishnas seem to co-exist quite nicely with the Mormons.

Katie and I have been going out there for quite a few years now. One of our favorite events is the the Festival of India put on every September. Every year, it seems to get bigger. I don't know how many people we saw, but it looked in the thousands. This time, we took Tomas with us.

In the collage below are some shots of the temple. Notice that Katie wore her punjabi suit given to her by a former Indian student. On the main floor of the building, they have a vegetarian restaurant and gift shop. Upstairs is where they have a large room that I presume is used for religious ceremonies, chanting and yoga. On the night of the festival, they had a band singing Hare Krishna chants. The audience sat on the perimeter of the room, and those who wanted to danced in the middle. You can bet that if Chloe were there, I would have joined the dancing since it is my sworn duty as a father to embarrass her at every given opportunity. 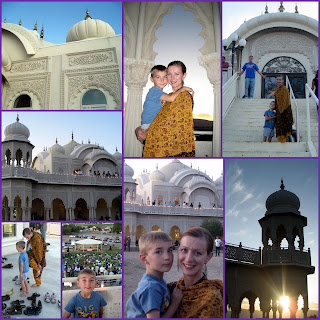 The next collage shows Tomas with the animals. He had a good time feeding the llamas. In the bottom picture on the left, the llama gave Tomas a big lick on the back of the head just after I snapped the photo.

As the sun set, we sat on the hill and watched the pageant of the epic Ramayana (the Hare Krishna equivalent to the Mormon pageants put on in the area). In the story, the hero, Rama, defeats the evil Ravana, an evil demon with ten heads. In the top middle of the collage, you can see Tomas and I in front of the 25' high wooden representation of Ravana. At the end of the play, Rama and his brother shoot arrows of fire at Ravana. The crowd cheers as evil is destroyed from the world.

In the picture below, you can also see some of the characters from the play. The costumes are really cool. The actors mime to a prerecorded soundtrack, and it's a bit corny. But, the play has charm, and we love it. I think it would be sad if it ever became a high tech, slick production. 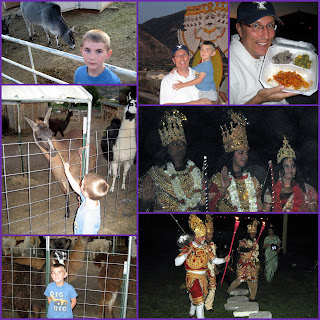 Here is a little video clip of Ravana catching on fire and the following fireworks. If you look closely, you can see the arrows on fire flying.

It was a great little Indian vacation. I have a feeling we're not going to have much money for a while to do another big trip. So, I see in our future a Scottish staycation to Payson for the Scottish festival, a Swiss staycation to Midway for Swiss Days, and a Greek staycation to Salt Lake for the Greek Festival.

Who knew Utah was so international?
Posted by Utah Krishnas at 12:59 PM No comments: 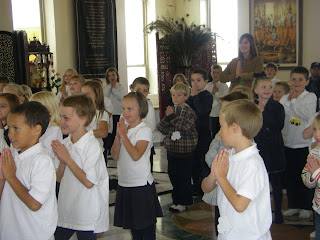 Olivia, Acacia and I joined Ainsley's 2nd grade class for a unique field trip to the Here Krishna Temple in Spanish Fork earlier this week. I had no idea they had a temple in Utah let alone 25 minutes from here. It was really interesting. Read more...
Posted by Utah Krishnas at 7:56 AM No comments:

This is a blog by Rushma, who attended the festival of India as a vender, selling tulsi plants. We just discovered her blog and wanted to share because of the vivid writing and the great video of the fireworks and burning of Ravana at the end.

"The mid- afternoon sun, the Wasatch Mountains in the backdrop and an open landscape. Anchored at a height, as we drove into this natural amphitheatre, we were spell bound. The Shrine of Lord Krishna, reaching out to the sky, carved with intricate sculptings, radiated itself."
Read more...
Posted by Utah Krishnas at 11:49 AM No comments: